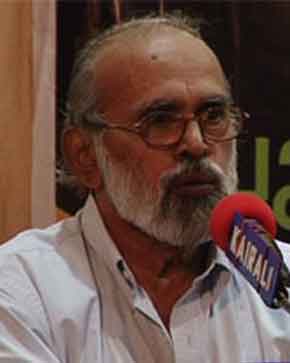 Music of the Mountains

The soothing softness of the jaded sunrays, the raindrops trickling from the stray clouds in the sky he saw while out hunting in the woods and the wind blowing the other way, all made him aware of the imminent monsoon. And he went up the mountain to collect firewood. As though by an intuition, he had already stored the flesh of the deer he marked with his arrow and the fish he caught from the stream - all dried when the sun was hot. Also he had collected in the chambers of his cave, the tubers and the fruits he found in the jungle; and the grains -ripe and dry- from the plants that came up on the valley below his cave, following the last rains.

And it was when he reached the mountaintop that he experienced the music of the mountains. It reached his ears, reverberating in echoes through the innumerable cave mouths on the mountain. A pleasing chill went up his body and he was excited. It was during one of his honey collecting errands on the mountain some time back that he experienced this music for the first time in his life. All day, he used to wander collecting honey in the gourd shells; during nights he used to sleep on tree tops, a camp fire below with dry leaves and wood protecting him from the beasts of prey. Even before sunrise he used to get up, grab the birds still in sleep in their nests, fry them in live coal and eat them. Thus, it was on the third day that he experienced the music of the mountains. He was captivated and he lost himself to the music. The heaviness of the gourd shells full to the brim with honey, he felt not. He had reached the topmost edifices of the mountain. From there he could see the stream down there in the valley and the herds of deer - tiny figures - their heads lifting after each gulp. All the while the music of the mountains flowed around him, leaving him in their tiny waves - splashing against the rocks around and breaking into fragments.

It was then that he noticed the girl on the rocks below - moving in a dance, the dainty steps. Her loin was covered from the waist with green leaves. Gracefully moving her full breasts and abundant thighs she was dancing. Suddenly he had the delusional awareness of his loneliness and his thoughts hovered around the insipid boredom of his cave.

Her dainty steps moved in tune with the music of the mountains. He attempted to attract her attention by clapping and shouting. She looked up at him raising her head but continued her dance. He tried to allure her, holding up to her the gourd shells full of honey. She would not give in. Nodding her head, she flowed in her dance. Realizing that she would be vanishing into the dense dark woods shortly, he desperately sprinted towards her. He darted through the trees and reached the rocks but she had already vanished into the dark vegetation. He was deeply perturbed - crestfallen. He had not seen a human being before;nevertheless by some strange insight he realized that she was of his species.

He could not pursue honey collection any further and he returned to his cave. He experienced a painful distress between his thighs. His back was all wet with honey, spilt from the gourd shells. For a long time after this experience, the thought of going to the mountain used to frighten him.

Now again, while listening to the music of the mountains, he hopefully looked around. At last his eyes were rewarded by the sight of the dancing girl on a rocky edifice among the trees at a distance. He observed her - the one who always appeared in synchrony with the music of the mountains - with pleasant interest. He was gripped in a desire to get her as his mate. She would not beenticed, he knew from experience once. And so he decided to kill her and possess her. Having searched out an appropriate rock, he was well positioned to hurl it at her.

It was precisely then that something strange happened. The music of the mountains came to an abrupt halt. In the void that followed, he saw her - motionless - looking at him with imploring eyes. His hands moved not. The rock he was holding dropped involuntarily and crashing against the rocks below, scattered to pieces. On the tree top, a yellow bird with a long tail made some noise of reproach. The bamboo trees screamed in their creaking noise. He ran up to her. She stood, without moving, looking at him. The green leaves covering her waist swayed in the breeze exposing her abundant thighs. He saw her breasts slowly rising and falling in tune with the rhythm of her breath, the same full breasts he had seen quivering while she danced. As he drew near her, he noticed that her eyes were wet. He stopped short. Those eyes were sad with grief and grievance. Later, when he hugged her, possessed with lust, she yielded in submission. He tickled her, stroking his beard over her face. Her full breasts pressed firm against his chest, her eyes closed. He was conscious of the anguish between his thighs. She lay beside, close and merging one with him. He realized the ecstasy of orgasmic experience. They lay close, motionless.

As he woke up, there again was the music of the mountains. But when it did resume, he would not know. There was breeze. Atop the trees there was yellow luster. He picked up his mate who was still in a pleasant slumber. Throwing her over his shoulder, as he used to carry the deer after killing it, he carried her to his cave. The descent through the sharp rocky terrains did not tire him; nor did he feel the cruel caresses of the thorny bushes on either side of the track. He was aware only of the music of the mountains.

He felt the music of the mountains thinning down as he reached the valley, and it pained him.

When they reached the cave, she woke. She looked around, her eyes widening in surprise. On the walls were his paintings - his expressions over the past so many years. Pointing to the dim corner of the cave, he drew her attention. And there was she! He had painted her in his own blood - cutting his body with a sharp stone and painting with the blood from the fresh wound. He had done it on the day of his first sight of her.

Leaving her waiting in the cave, he set out with his bow and arrow. The stream was full of ponderous fish. Having struck the big ones, he returned to their cave. Striking two stones against each other and letting the sparks fall on cotton wool, he made fire. She roasted the fish in the fire and gave him. She watched him in contentment while he was biting at the fish and eating in mouthfuls. Then they heard noises of thunderbolts outside. She shuddered and moved close to him nestling. He went out of the cave. He saw formations of dense rain clouds. A drop from the clouds fell on his shoulder and spurted. He came back to the cave. He closed the mouth of the cave with a big rock and drew near her. As they were warming each other in an intimate embrace, the thought came to him that he had not stored enough firewood to see the monsoon through. He was perturbed.