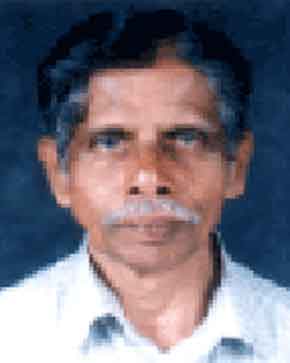 He has been watching those kids for the past one week, performing acrobatics on the pavement across the bus stand. They would be there when he boards the bus to office in the morning and when he gets down from it in the afternoon; a boy and his little sister. The boy's face was dark with dirt. So was his sister's. Quite often she would be wiping her running nose with the back of her hands. Her little hands were cute. She must be only five or six years old. She was wearing a torn, dirty short skirt. With shorts and a torn shirt, her brother was dressed up a little better.

It was six in the evening and they were still doing acrobatics. May be they were performing for the whole day under the scorching sun. Facing a crowd that changed like a kaleidoscope the boy was showing acrobatics what an eight-year old is capable of, expecting the presence of a kind soul amongst the crowd. Somersaulting and passing through a small iron ring. He used to watch them performing while sitting inside the bus in the early hours of the day. The scantiness of the mob never discouraged the boy. Hardly have anyone be seen making a substantial contribution. The people would be waiting there with an obscene curiosity to see what happens next. When the expectation of witnessing a big circus falls into boredom, they would walk away pretending not to see the bowl extended by the frail hand of an emaciated girl. The boy would be continuing with his acrobatics.

He was in a hurry to reach home. It was a hectic day. In fact each day has been hectic. In the struggle for holding on to your position you lose days, months and even years. Gradually, even before you realize, you lose yourself.

The boy had stopped performing and is now sitting in a corner inspecting his toe. Blood is oozing out of the wound. The boy might have injured himself while doing some acrobatic feat.

"What happened?" he asked.

The boy turned his face down. Obviously, the boy was avoiding him as he was not looking for anyone's sympathy. He moved on. It was at that time that the girl with the bowl approached him.

He fumbled in his pocket and took out a twenty five paise coin and put it in the crumpled bowl. The girl's eyes gleamed.

Twenty five paise! While walking home he was thinking. She asked for only ten paise but I gave her two and a half times as much. What magnanimity.

The elevator was on the ground floor itself. He could just walk in and press button number eight that would take him to the comfort of his flat on the eighth floor. He would then remove his shoes and relax in the sofa and sip tea and select any one of the thirty odd channels in the TV. Sarada would have prepared dosa or banana fritters.

He did not enter the elevator. Instead he retraced his steps and went out of the gate. He fished out his purse from the pocket. Yes, there is enough money. He could give one rupee; or why not two rupees?

'What a chicken-heart you are?'

'What is two rupees worth these days? Is it worth a morsel of food?'

He took out a ten-rupee note and kept it aside.

The kids were not to be seen on the pavement. Today's show must have been over. Or maybe the boy could not continue because of the wound on his toe. Maybe the boy bandaged the wound and even tried to resume. Unable to bear the pain......

He walked back home.

It has become a regular scene; his daughter eating ice cream. When he goes to the office or returns from there, she could be seen sitting there with an ice cream cup. And whenever they go out, she will demand for ice cream only.

"Chubby girls should not eat too much ice cream" He would say.

But she would continue eating; with renewed ecstasy.

He recalled a dark girl, frail and shrivelled, dirt sticking around her nose and with dry unkempt hair. A girl who has still not lost the flicker in her eyes!

"The secretary had rung up. He wanted to see you." Sarada said:

"It's about the terrace party in the evening."

"Oh, yes." He had completely forgotten that!

The secretary had asked him to arrange for the sound system. The orchestra has already been arranged. Singers are available from among the residents. He picked up the phone and started dialling.

"Seven o'clock, sharp seven." He said it rather rigidly. The party should not get spoilt for want of a sound system.

"The party was grand......" said Sarada, on reaching their flat after the party was over at one o' clock midnight. Looks like Ragini is endorsing her mother's view. God only knows how many cups of ice-cream this girl must have gobbled.

"Chicken biriyani and fried fish were excellent." Sarada said. "How was the vegetable fried rice? I wanted to taste the Gobi Manchurian but there was absolutely no room in my tummy. I had to keep some space for Pista Ice Cream, which is my weakness. So, Manchurian was spared".

"Food was good." He also agreed. Since it was a buffet party one could eat as much as he wants without prick of conscience. On the long table covered with white linen, steaming items were laid in round and rectangular shaped steel vessels put on simmering gas stoves. And on one side, a bar with an array of bottles was arranged.

"The orchestra was also good."

"After paying six thousand bucks they will beat you up if it is not worth it."

"It's not worth that much."

"You don't blame the orchestra for the slithered and out of tune singing."

"I didn't like Rohini's dance at all. Whenever that dance with Prabhu Deva and Nagma is on, I used to switch off the TV. I don't want our daughter to see that dance. And it is not a dance fit for a sixteen year old to perform on stage; shaking it up here and shaking it up there."

He laughed. Probably that was the first time he had a hearty laughter since he woke up that morning.

"Why are you laughing?"

"Do you know? Rohini's Mother had been teaching her daughter this very dance for the last one week. In fact she bought a videocassette of the movie in which this dance appears. Didn't you watch them videotaping her dance? That is for preserving it and also for showing to their friends and relatives."

"Yes Ma'am, this very dance. That takes them to the upper strata of the society. Are unaware of the problems that the neo-rich face? If you don't want to be left out, better teach your daughter the dances of those film actresses - Silk Smitha and Nagma."

Before going to bed he told Sarada. "Do you want to listen to a secret?"

Association had ordered one hundred and fifty Chicken Biriyanis. But only about ninety guests turned out. And out of that some were pure vegetarians. They expected some guests from outside, but many of them did not turn up. And about sixty to seventy plates of chicken biriyani were left over!"

"They packed the whole thing in a plastic bag and dumped it in the corporation bin. A perfect murder...!"

"At twenty-five rupees per plate, imagine the money wasted on it. Fried fish and vegetable fried rice were also left over."

He paused for a moment and then told, mostly to himself.

Sarada was already asleep. He lay awake for long time. The defiant face of an eight-year old boy stooping over with fingers pressed on the bleeding wound while suppressing pain with clinched teeth had made him feel ashamed of himself.

He went to the society office in the morning to check the accounts. Twentyfive thousand rupees was spent by twenty-five families for a night's mirth! The thought of the twenty five paise coin that he had given to the circus girl the previous evening, came up in his mind.

The acrobats were not seen in the bus stand. They must have gone looking for new pastures. That's how it is. They will camp in a place for a week. When the same acrobatics are being repeated, the public would turn away. This is how it is even with big circus, let alone this tiny two-member team.

He saw them once again during one of his evening walks. They were sitting in front of a shop. Its shutters were down. The shop was in one of the many by-lanes of Mahatma Gandhi road. They wore the same attire, had filthy face and their mucky rucksack was lying nearby. The boy was sitting there, trying to open a small packet that lay in front of him. His sister impatiently was watching him opening the packet. The packet contained four idlis.

When he went near them, the boy raised his head and looked at the intruder, with the expression 'now what..... When everything is over and we are going to eat...'

He asked the boy.

'Where are your parents?'

'Don't have mother, she died.'

The boy said these without any emotion. Little sister had started to eat idlis.

The boy too had his hand on the idli, waiting for the rudely intruded stranger to leave.

'What'll you do if I give you ten rupees?'

Boy's face brightened. He smiled coyly. The grown up look on his face vanished and once again he became an eight-year old.

'What'll you do with that money?'

'We will go for a movie.' The little boy didn't have to think twice for an answer. He placed a ten Rupee note on the boy's hand. The boy unfolded the note and looked at his sister unable to believe own eyes. Her face also brightened. She stopped eating and took the note from her brother's hand.

'What are your names?'

He turned around. The boy told something to his sister and swiftly opened his sack and took out two iron rings. Then like any other acrobat in the world have done, he walked backwards four steps and clapped his hands and somersaulted four times. Then he somersaulted backwards and then again forwards. He let his body through the iron ring with difficulty. Then he let his as well as his sister's body through the same ring with much more difficulty. He walked balancing forwards and backwards while his sister was standing on his shoulder without any support. He then kept a long rod upright on his forehead, balanced a cup on top of it and walked.

Leaving aside his food, the boy was showing these tricks only for his sake. With wide eyes and astonishment on his face, he watched the boy performing. That was the greatest show ever witnessed by him!

THE GREATEST SHOW, short story by E. Harikumar, 'ഏറ്റവും മഹത്തായ കാഴ്ച' (Ettavum Mahathaya Kazhcha), published in the Easter Issue of Malayala Manorama Weekly 1996 and included in the book titled ‘Pachhappayine Pidikkan’ (To Catch a Grasshopper). The story To Catch a Grasshopper won the Padmarajan Award for the year 1997. Translated by E. Satish Narayanan.