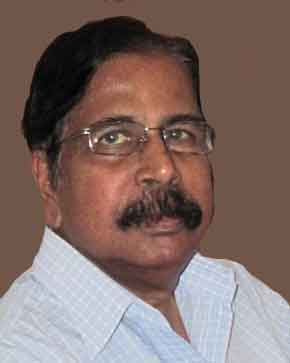 Down in the kitchen she saw them, the cockroaches. They appeared at the corner of the table, on which she was preparing the morning coffee. They rattled and stared at her menacingly for a time and disappeared at the far edge of the table. She took the coffee to bedroom. Her husband was still in bed. She switched on the light and the soft, agreeable light began to flow. He smiled at her as he sat on the bed and stretched his right hand for the cup. He drank the coffee with a gloomy face and she watched him sipping the coffee. It was a stale routine, she thought, and every time she saw his dreary face and gray hairs, she felt pity. And it was this compassion that alone prevented her from being an aggressive wife. As she crossed the lobby with the empty cup, she thought she saw a black little creature crawling on the distempered wall. She wanted to see what it was, but an instinct kept her moving and she did not stop.

There were more cockroaches in the kitchen now, and they rattled and maneuvered around the table and on the wall. Some of them flew and landed on her head as she tried to enter the kitchen. She waved her hands aimlessly in a bid to drive the cockroaches away. But they were many in number and she had to withdraw eventually. She thought of telling her husband about this.

Back in the bedroom her husband was combating with something, which she understood not until he gaped to utter the word ‘cockroach”. He was striking the insect with a folded newspaper. The cockroach dashed and dodged about him and he had to spin around to strike it.

‘It’s no use’, she wanted to say. ‘There are hundreds of them in the kitchen.’ But she did not say anything, instead watched him taking the dead cockroach by the paper and throwing it out through the window.

‘It is strange’, he said gasping. ‘Isn’t it strange? There was no cockroach in this flat.’

True, it didn’t occur to her that there had been no cockroach in their apartment. Her husband’s surprise was not unfounded. He had a lot of friends in that locality and nobody ever had complained of cockroaches.

She withdrew. She has to fix the breakfast for her husband before 8 O’clock. He would have to get a tram latest by half past eight to reach his office in Dalhousie Square by 9 O’clock. I will tackle this problem myself. Only I have to get some cockroach poison when I go out to the market. The market was only a few furlongs away, and as she walked through the Southern Avenue, the cockroaches no more worried her. She was preoccupied by more serious a matter; her appointment with the Doctor.

At first she protested, violently in a gesture to defend her right to carry her own pleasant burden. Then he talked of the depressing economic conditions that forced him to take such a decision. Their two children were to be fed and clothed. They should be given proper education. The elder one was a girl. She should be given at least an academic education. But their son should be given higher technical education. ‘The job market is very tight’, he said, ‘and unless you give him good education he will be left out.’ Besides, there were other expenses too, house rent, electricity and laundry charges. And the old maid servant should be paid. Life in a city like Calcutta is hard. And she knew she had to relent. But it was disgusting. She felt sorry for the life that was developing in her womb. But it was a question of existence - existence of the living, who happened to be born. This savage propensity for resisting the intruders was sickening. But you have to put up with it. She thought of her children, and was glad they were sent home during summer vacation. She was missing them very much, but it was better. She wouldn’t like them to be here now. They would be happier with their uncle.

The market was less crowded and smelt of fresh vegetables; but she thought of her children and her appointment at the Doctor’s in the evening. When she came out, the street was crowded and the atmosphere was filled with dust. There were a number of demonstrators in the street with broad red banners in their hands; the banners were all in Bengali and she could not read them. They were leading a procession and they shouted slogans in Bengali.

‘Inquilab Zindabad,’ and ‘Our demands should be met.’

The procession was very long and she waited on the pavement to cross the road and watched the demonstrators filing past her. They shouted loudly and raised their fists in the air in utter excitement, and suddenly she remembered the cockroaches that besieged her kitchen.

The medical store was nearby and she asked the boy with the dump look at the counter if cockroach poison was available.’

But it was apparent that the boy did not quite clearly understand her requirement. Then, finding the trace of surprise on her face, he said.

She waited, and saw the boy going to the cash counter and conferring in a hushed voice with a tall and lean fellow. Presently the tall fellow came to the counter and asked her if she wanted cockroach powder. She nodded and he took out a red packed from one of the cupboards with glass panes, and gave it to her with elaborate instructions for use. She cut short of him by telling that she knew how to use it, but he wouldn’t listen. He was on the verge of repeating the whole speech, when she said

Then he put a full stop by cautioning: ‘It’s poisonous, deadly poisonous.’ She remembered the words with uneasiness when the Doctor gave her injection in the evening. The Doctor was a plump woman and asked her about her children.

‘You say both are going to school?’

‘Yes’ she said, and instantly she felt the needle plunging into her flesh.

It has to go, she thought, and that is what worries me much. In the taxi, which took them to their flat, it was comfortable. But she was worried. She felt her abdomen with quivering hands, and instantly convulsive sobs filled her breast and choked her. She wanted to weep, lonely to her own heart’s content. She wished if her husband started repenting. But there was no sign of remorse on his face. He was staring blankly through the windshield and she felt desolate.

In the bright light of the bedroom her face looked very pale and in low spirits, and her husband was alarmed.

‘I am alright’, she said, ‘It’s only a head ache. I will take an aspirin. Do you have one with you?’

She lay down on the bed, and her husband looked worried too.

It’s the conscience that troubles me, she thought. I now have a guilty conscience. But it has got to be done. There is no other go. These days you have to live, and live happily, for which, at least, you have to pay a deaf ear to this beat of the wings. You will be happy tomorrow when memory of this nightmare ceases to haunt you.

We should bring our children back, she thought. I am missing them very much. Fifteen days seemed longer, and I can’t stand this solitude any more. I should have them around me.

Dinner was prepared even before they went to the Doctor’s, so that they only had to serve it. She felt better after eating, and she watched her husband taking the red powder in small lumps in cardboard pieces and putting them in the corners, and listened to the cockroaches rattling the lids of the tins and beating on the walls of the kitchen. They are aggressive, she thought.

Her husband was already in bed when she came to the bedroom.

He lay outstretched on the bed, and she switched off the light and found her place in the bed. The street light came stealing through the window and she could see that her husband was not asleep. He turned and hugged her.

He patted her on the back and kissed on her cheeks.

‘You will be happy tomorrow,’ he said.

And that was the sort of assurance she was waiting for from him, and she felt slightly relieved. Then she felt his embrace gradually slackening and his breath becoming regular and rhythmic and in a few moments he was fast asleep.

For a time she listened to the timepiece ticking and the humming of a motor vehicle dying away in the street outside.

And then she saw them coming. The cockroaches. They were myriad of them, and she laughed at the very idea of cockroaches leading a procession. You’ll be dreaming, if it is true, she thought. But that was what they were doing. The procession swelled in the street and the cockroaches shouted and flew up and down in an aggressive manner. She was even more perplexed seeing the banners which some of them carried.

‘We also have the right to exist.’

I will go crazy, she thought. But the procession was turning violent and out of control and some of them flew at her like a sortie of bombers and she suddenly woke up with a scream. Then she knew it was only a dream and she was assured. She nestled to her husband and felt sleep overcoming her.

She overslept, and when woke up sunray crept into the room. On the floor she found the dead cockroaches, hundreds of them lying on their back. She thought of the crumbled leaves which fall dry in the cold winter mornings from trees in her native home, and of her mother who passed away years back, and of her children, and of the tiny particle of life brewing in her womb, which was deprived of its right to exist, and she was sorry.

THE COCKROACHES, short story by E. Harikumar, published in Accent from New Delhi in 1965. Malayalam version കൂറകൾ ' (Koorakal), published in Mathrubhumi weekly 1966, included in collection titled ‘Koorakal’ (The Cockroaches). This story is made into a telefilm in Malayalam.